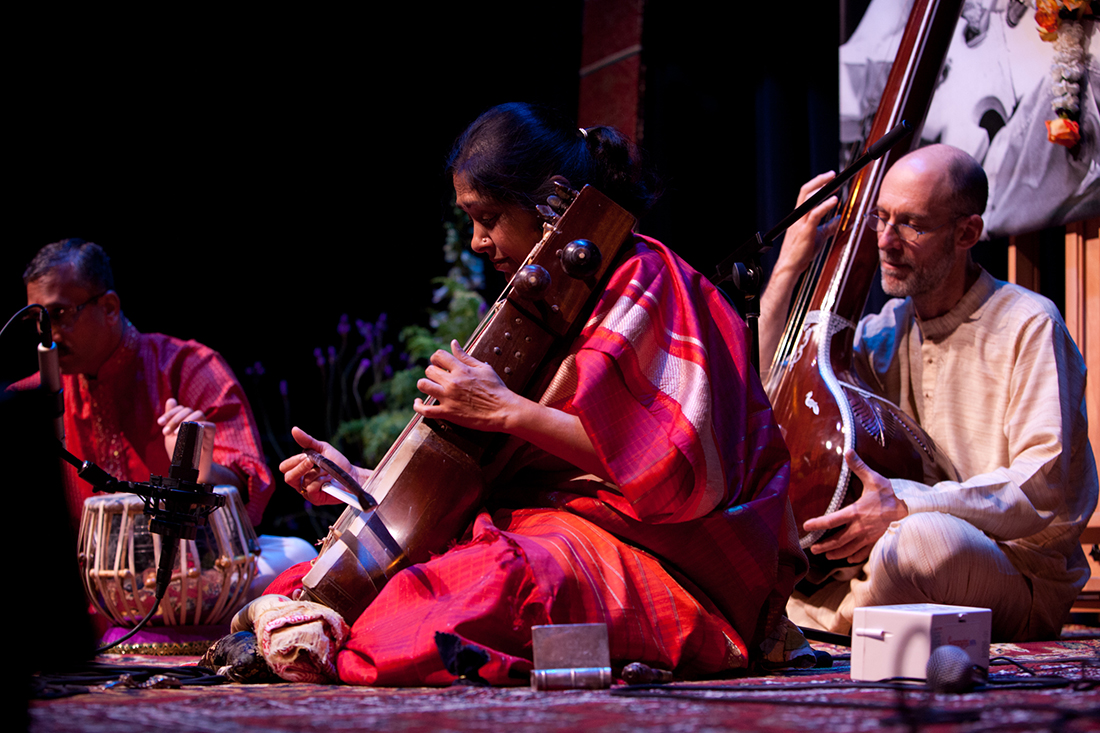 “Aruna reveals an unerring, superbly sensitive feel of the “sur” and tone, nearly as ravishing as that of Ram Narayan.”
- Economic Times, New Delhi

“An image of her father – one would instantly say that about Aruna. Her bow evolves the same sonorous and weighty tone and swara, fingers shift craftily and imperceptibly from one to the other string and octave. She gives us the same imposing bass”.
- Times, New Delhi

“Ram Narayan’s unique tone and technique are to be found in toto in Aruna.”
- Economic Times, New Delhi

“Aruna’s superb technical control and her magnificently sympathetic understanding of her instrument has made her much in demand. The sheer exuberance of her playing has delighted audiences in this country and abroad”.
- Link Newsweekly, New Delhi

“The unfolding of the raga showed her refined sense of design and proportion with a commendable insight in to the fineries of presentation in a sensitive and intricate medium”.
- The Times of India, Mumbai

“While his son Brij Narayan has established himself as a leading Sarod player, his daughter Aruna is a sarangi player and most accomplished exponent of his unique style. Both father and daughter have concentrated on careers as soloists which is an obvious if difficult path to establishing a new prestige for the instrument. Aruna’s position is, if one may say so, doubly unique, in that she has taken on an accompanying instrument and male preserve and reversed both situations.”
- Neil Sorrell, musicologist, University of York, UK

“Her three-tier tans in Raga Shri racing past the three octaves bore an eloquent testimony to her technical acumen, while the following Raga Pilu once again showed her as a soulful, feeling musician”
- The Times of India, Mumbai.

“Kalle won repeated applause from the audience for her mastery over the instrument.”
- India Abroad

“Considering the difficult make-up of the Raga Shri, one was prepared not to be surprised by a crop of miscarried or false notes. But what a surprise that there was none at all. Aruna’s rapid runs, each racing past the three octaves were most imposing”
- Economic Times, New Delhi

“Aruna Narayan Kalle is the rare female sarangi player – she is also considered the only one, in fact. At a relatively young age, critics say she gained complete control over an instrument, considered to be the closest to the human voice, and also the most difficult Indian instrument to master. A Canadian resident, Kalle has given the background score for several films, including Kama Sutra and Monsoon Wedding.”
- India Abroad

“On several occasions, I had the privilege to hear Aruna’s music. It was always authentic, polished and yet natural in its flow and powerful in its intensity. Her playing is marked for its graceful nuances. The sincerity and simplicity of her music – as also of her personality – do not go unnoticed. I often found listeners with closed eyes, playing rapt attention to her ragas. In that state, it is difficult to believe that this divine music flowed from the humble sarangi. She has shown that in the hands of an expert this instrument has almost limitless possibilities.”
- India Perspectives, New Delhi

“His daughter Aruna Narayan Kalle, who now lives, plays and teaches in Toronto, rarely veers away from the solo format. Pulling off a two-hour solo concert with a sarangi, points out Aruna, needs a great deal of expertise. That Aruna has carved a niche for herself puts her in the top league, though she is rarely heard in India.”
- The Times of India, Mumbai